Mindset and energy are the biggest elements in healing.  My elementary study of quantum physics has only enticed my desire to know more about it, but even with minimal education, I am convinced of this!   Not only has my own experience proven this to me, but I continue to see first hand the cases around me where people are either on a path towards healing or one of further destruction.  Always, I repeat - ALWAYS - there is a mindset and energy catalyst to the direction their body is heading.

With my own self-tests of energetic and mindful influence, along with the ability to begin recognizing these connections in others, the seeds of healing of the unseen were planted deep down within my soul.  I will get into my own experiences and continue to feature others' in further articles, but for now, I want to highlight the following two.  Both incorporate breathing and the energetic and healing impact on our bodies, but from very different perspectives and practices.

The first story is recent, published earlier this week on the Today Show.   It showcases the power of the mind through the practice of karate, and the energy transformation within the body through breathing exercises in children healing from disease - cancer specifically is discussed in this.   These children learn these tools and how to utilize them to aide thier body in the healing process.  One patient discusses how he was able to reduce his pain medication...that alone is HUGE!   And while it's not eliminating the conventional treatments (perhaps it could - when people are ready for it), it has the ability to greatly impact the child's rate and success of long term healing!   And just as importantly, it's allowing the non-western approaches back into our medical system...call it integrative or whatever suits you.  This is a step in the right direction!   Check out the full story here.

The second story is one of my favorite healing stories!  It comes from the book written by Kelly A Turner, PHD.,  Radical Remission, a project and study of late stage and terminal cancer patients who survive with notable non-conventional method(s).  The study's purpose is to inspire, share knowledge and explore why many survive while others don't.  The differences are not in the conventional methods (surgery, chemo or radiation), but rather in the natural side of care or even the unseen.  I highly recommend this book to any and all cancer patients - the inspiration alone will be sure to have an impact!

Shin was one of the patients in her study, and his story made quite an impression on me.  Given a terminal and short-term diagnosis, Shin returned home to live out his final days with his family.  In his first days, he realized how much better he was feeling just from getting up early to watch the sunrise.  During his morning ritual, he began to focus on his breathing, discovering that which each intentional exhale there was a pattern - a pattern of cleansing and releasing the dirty energy that was built up within him.   He realized that fresh oxygen and filtered, clean water were two things he had not received in his 5 months hospital stay, and now they were his breath of life - literally!

You will really have to read his story and others in the book to get the full understanding, but there was an experiment that Shin did that caught my attention the most.   With some attention and exploration, he realized the birds would begin singing exactly 42 minutes before sunries - every single day.   Further study revealed that at first signs of light (42 minutes prior to sunrise) begin the process of photosynthesis, at which time the trees begin to release the highest levels of oxygen.  It is believed that the birds sing in order to recieve the most amount of oxygen into their bodies.  So,  Shin decided to do the same.  From then on, he awoke early enough to chant melodic tones and breath in deep the purest forms of oxygen from his rooftop every morning.   This practice began his upward spiral towards whole healing, and opened his eyes to the other parts of his life needing the right attention to continue healing from cancer!

So let it be said, there is power in focused breathing.  Try it today...even if only for a few short minutes. 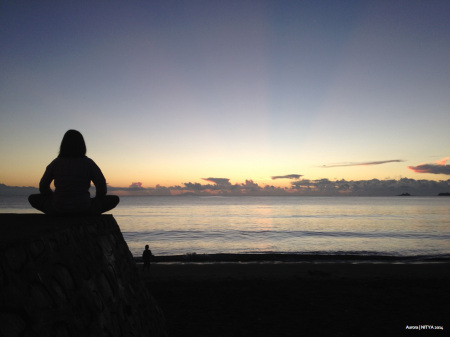